Due to lack of funding this event is no longer taking place as previously advertised. Instead Ecotainment! in collaboration with Greenpeace will be demonstrating a Solar Powered Cinema at the Shelley Theatre in Bournemouth, 7pm on 17th March. The event will have an environmental theme and tickets will be on sale shorty through the Shelley box-office.

Our prices start from £150 for a children’s party up to £1500 for a professional solar powered stage with sound & lighting. Please contact us if you would like a quote for your next event or campaign. We’re very sorry for any disappointment this may have caused further information about this event can be found on the British Science Week & Shelley Theatre websites.

They are the folks who add dash of controlled lunacy to the modern festival experience, providing us with sights (and sounds) that provoke a combination of wonder, bafflement and hilarity. No one has yet come up with a suitable snappy collective name though, so for the moment it’s probably best to describe them plainly as the ‘unusual sound systems’ (USS).
For each their route to creating their own USS was slightly different. For Joimson, it was his job at a Dorset recycling facility. He had become frustrated by the sheer amount of useful material – and decent records – that were being thrown away and decided he’d create (what he thinks is) Britain’s first 100% recycled mobile disco,‘Tip Of The Pops’.  “All of it is reused,” he confirms. “From the wheelbarrow to the turntables. Over the years I’ve picked up lights and decor, mirrorballs. About 5 years ago someone dumped two virtually brand new batteries – those became my power supply.”
“People seem to love it though. When you get on the mic and explain to them where it’s come from they are pretty amazed. It’s great to be able to educate people about all this stuff as well as having fun yourself.”
Meanwhile the Police Rave Unit, a posse of police impersonators that blast their sounds from what looks to be a riot van is a “joke that got out of hand.” 2CI Wogan of the PRU was the organiser of the backstage area of Shambala when one year they had a police-themed party. “We had this old transit van knocking about in our yard and said ‘wouldn’t it be funny if we turned it into a riot van and a load of coppers got out the back at the end of the night and got some speakers out’.”
Needless to say it has often created confusion amongst punters. “People do have to do a double take quite a lot of the time. And we’ve had a couple of pulls on the motorway – we even got followed by some plain clothes at Bestival.”
Odder still is the Anarchophonium, a battery-powered barrel organ that plays ska, punk and old rave tunes whilst being wheeled around in a pram by a bunch of jokers dressed as monkeys. “Ah the monkeys have thrown off the shackles of oppression and are playing the organ themselves. We’re trying to encourage other people to join the monkey revolution,” explains Erasmus of the Anarchophonium collective. “Barrel organs were amongst the oldest devices for recording music so you could say this is proper old skool.”
Add to this list firmly-established yokel DJ team, The Village Disco and you could even describe this as a movement. But does anything link the unusual sound systems? “I think there is a rebelliousness to what we all do,” suggests Joimson. “Festivals are very regulated these days but mobile systems give an edge that reminds people of the early days of rave culture. Despite all the big names on at a festival very often it’s the odd sights and the walkabout acts that are the highlights for people.”

I just returned from a rather wet but far from miserable day at an ethical student eatery in London called the Hive Cafe. It was their first birthday party and although it rained for the duration a thoroughly good time was had by all! The Hive is the retail outlet for Growhampton an award winning sustainability project run by the Students Union at Roehampton University

Growhampton minions have been plotting, potting and planting an Edible-Campus by creating grow-spaces, reviving Orchards, tending to Bees and Chickens as well as sourcing products and services from ethical local businesses. This means the produce is fresh and delicious, the flavour combinations are seasonal and the whole outlet just screams wholesome goodness

The cafe consists of two converted shipping containers. Upcycled and re-purposed furniture indoors and out surrounded by fresh herbs and flowers. As I am such a junk-junkie one item that caught my eye was the enormous and rather old water-butt that may have been part of the original Victorian chapel and colleges. It was still working and took pride of place in the courtyard facing the cafe

Please take time to watch video, visit their website and view the blog. It’s inspiring and if you can’t get down there to taste the truly scrumptious produce please consider making a donation to their Crowdfunder campaign. They’re expanding and want to triple the indoor seating area by taking on another shipping container or two ! 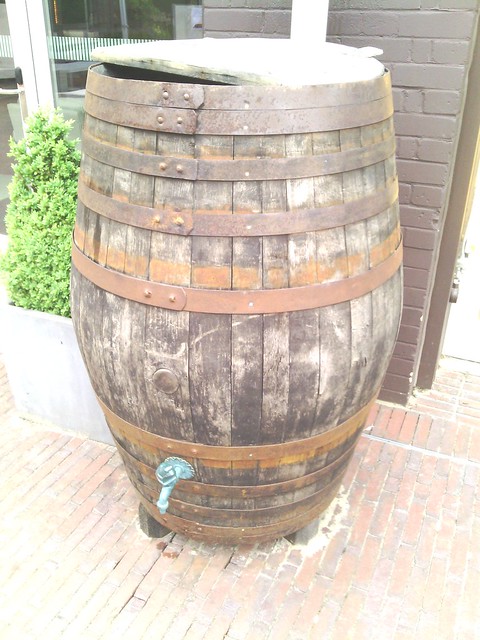