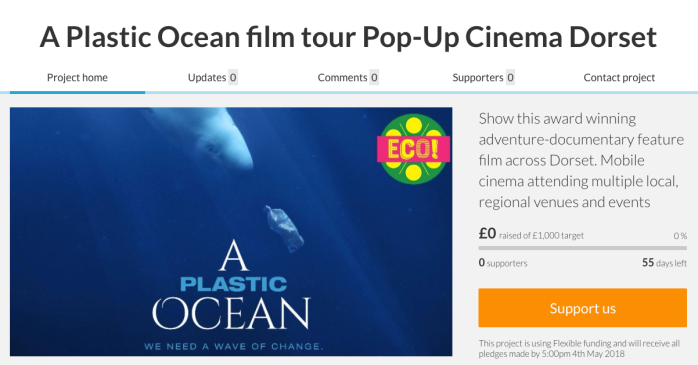 On the 5th May 2018 it will be one year since we started showing the adventure-documentary feature film A Plastic Ocean. In our first three screenings we averaged over 100 audience per screening. During British Science Week we are organising a further 7 free screenings sponsored by Bournemouth University. We are asking our audience to contribute any amount to take these film screenings to even more audiences across Dorset and beyond!

We also have Sticker Sheets, Art Canvass Bags, Aluminium Water Bottles & Sponsor a Screening rewards. Please go checkout the campaign here and get social by sharing and liking this page – Thank You ! 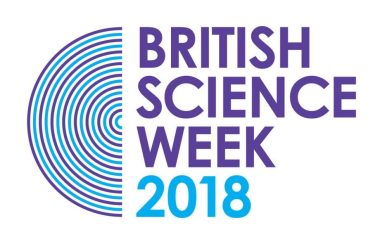 Bournemouth University, Ecotainment! and Bournemouth Park Cafes are hoping to bring about a ‘Wave of Change’ during British Science Week (March 9–18th). They’re inviting members of the public to one of seven free film screenings of the award winning adventure-documentary A Plastic Ocean. Since the films release in January last-year the issue of ocean plastic has hardly been out of the news. Thanks to the likes of Sky News ‘Plastic Tide’ campaign and the BBC Blue Planet 2 series which was seen by 17 million viewers.

The events taking place in Bournemouth, Poole & Swanage are aiming to inspire the next generation of scientists and engineers, whilst encouraging even more participants to #PassOnPlastic. Do not miss this opportunity to see A Plastic Ocean for free and meet with like-minded people from across the region. All events are open to the public and businesses that are interested in helping turn the tide on ocean plastic by reducing their plastic-footprint.

To claim your free ticket to one of these screenings please visit www.creativedynamo.net/science-week/ or in the case of Hengistbury Head call the Visitor Centre on 01202 451618

Unlike other environmental issues such as climate change, genetically modified organisms or air-pollution the plastic ‘problem’ is plain to see. Thanks to social media and community campaigns, local actions such as beach cleans have become popular activities in Dorset. Every year British Science Week launches a Citizen Science campaign and this year they have chosen Plastic Tide as their partners. If you cannot get to a beach-clean you can virtually log beach litter from your computer or smart-phone and help train a super-computer to identify marine debris.

Most beach litter is made up of on-the-go items, single-use plastics such as bottles and straws. Environmentally conscious consumers are already avoiding these whereas caterers such as Bournemouth Park Cafes are phasing them out. They have made the switch to compostable coffee cups, cellulose straws, cellulose coffee lids and food containers made from recycle sugar cane mulch. Bournemouth Park Cafes have also signed-up to the national Refill scheme and are more than happy to refill any bottle. Parks cafes aim and drive is toward moving away from all single use plastics entirely over the next 12 months.

The film A Plastic Ocean is 101 minutes long and will be shown with English subtitles. For further information, group bookings (5 or more) and to organise a screening in your area please contact Lee Hadaway info@creativedynamo.net or call 07789 865934

It seems all our hard work and event partner support is finally paying off. Plastic Ocean screenings are getting a mention on front page of local paper today in an article about glitter aka micro-plastic.  Let’s celebrate sustainably this Christmas!