The Past Twelve Years pt 2 (BGG to XRW)

Over the past 12 years I have done a lot of work. The purpose of this short series of posts is to bring you up-to-date rapidly from BGG to XRW (2007 – 2019). Before you proceed to pt 3 you absolutely must read this post conveniently titled ‘This Changes Everything‘ which was the second part of my first-foray into film. These two sell-out solar-powered screenings laid the foundation for the Pop-Up Cinema events that came after.

The importance of This Changes Everything at Shelley Theatre was three-fold. Firstly it sold-out. To my knowledge this was the first sell-out show at the refurbished Shelley Theatre – an arts venue that I was campaigning to save as far back as 200X. The only reason the first film-event didn’t sell-out is because there was a mix-up at the box office (seats were available but people were turned away). Special mention here to director Jerry Rothwell who by attending our first screening had allowed us to set the bar very high indeed.

Secondly I had invited and managed to pay expenses for End Ecocide, a legal campaign to protect the Earth. Inviting London lawyers to a film-event in back-water Bournemouth was risky but it worked. It went so well that EE ended-up following our lead and organising similar events afterwards. I also want to ‘BIGGUP’ the local Bournemouth & Poole Greenpeace whose influence helped get these film events off the ground.

Thirdly, not long after the ‘This Changes’ blog post was published it was ‘liked’ by Polly Higgins. It was more than just a click she typed a couple of words for which I will be eternally grateful. Polly is the lawyer who made it her life’s work to promote Ecocide after making the legal framework possible. Co-incidentally Polly Higgins is also from South-West England which is the home of the BGG & Ecotainment!

Sadly Polly Higgins died earlier this year, as a mark of respect Extinction Rebellion parked a boat named after her outside the Royal Courts of Justice in July. Urging citizens and the media to ‘Act Now’ on the Climate Emergency.

Go to Part One or Part Three

The Past Twelve Years pt 1 (BGG to XRW)

Ecotainment! began twelve years ago at the Big Green Gathering festival in 2007. This was by no means my first ‘action’ BUT that event, which was also the last BGG for a long-time (due to licensing issues), was the genesis of my own personal campaign. Over the years the BGG had no-doubt inspired many others to take environmental activism into their hearts, minds, homes and across the globe – where it belongs. Respect due ‘BIGGUP’ the BGG crew!

Like a lot of environmental campaigners I have been energised by Extinction Rebellion and their fresh approach. This has led me to provide Extinction Rebellion Wimborne (my home town) with technical and logistical support for their first ‘action’ a die-in which took place in July. Recently I have written a press-release and created graphics for their Climate Emergency talks taking place tomorrow (Thursday 12th September 2019).

To help put all of this into perspective I recently came across the programme for the Big Green Gathering 2007 – where it all began! The opening welcome titled ‘Lifestyle Change Not Climate Change’ struck a chord with me. It seems as if things have not changed that much over the years which is why I wanted to share it with you so you can make-up your own mind. 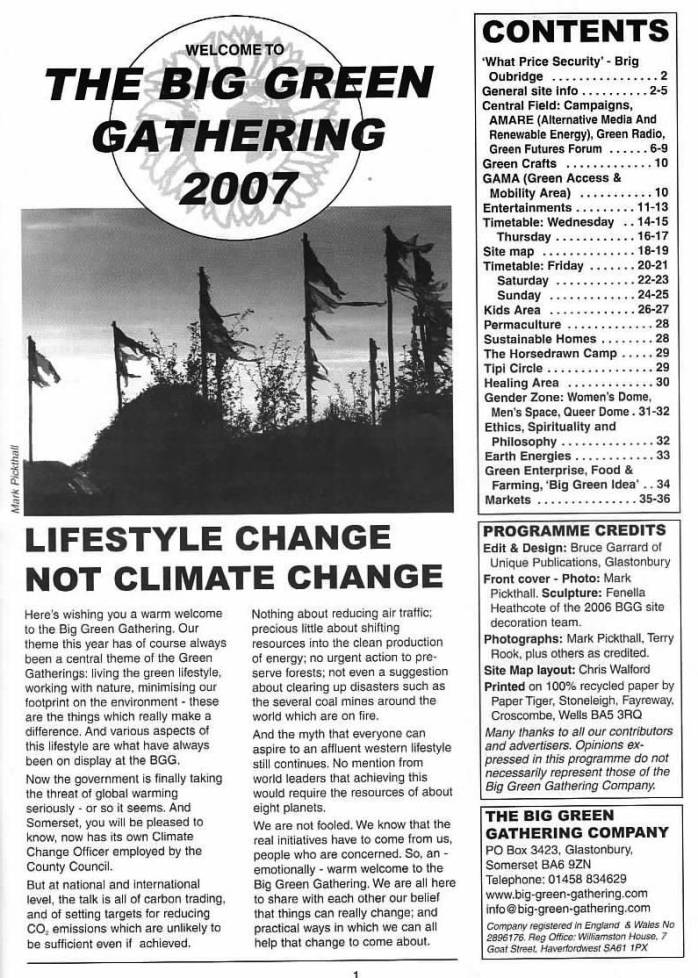 The School in the Cloud (British Science Week)

In a pitch-black Indian street market where the only electric light appears to be coming from the directors camera the locals are being told about a plan to educate their children using just a computer screen. Most of them, especially the children, have never seen a computer before let alone used one. Yet they are about to be connected to the Internet for the first time in a purpose built self-sufficient classroom with no teachers. The locals are dubious and rightly so, but the person who donated the land confidently reassures them ‘a wise man is always ready to learn more’.

The School in the Cloud is a 2018 documentary feature-film which will revolutionise what you thought you knew about learning. The film follows Professor Sugata Mitra of Newcastle University as he rapidly scales-up his ‘great-big experiment’ with a $1m award from TED the Internet based ideas organisation. Director Jerry Rothwell and co-director Ranu Ghosh allow us to see the world through the eyes of participants (whose lives are being transformed) as well as introducing us to the ideas and objections driving the scientific process.

The film expertly navigates the geographic and cultural divide between learners in India and the UK whilst explaining the concept of self-organised learning. Self organisation gives children the freedom to learn, which in-turn gives them better understanding and test results. This seemingly simplistic approach is at odds with the traditional top-down school model which originated 300 years ago. Mitra’s charisma and determination to provide an education system for all, even the most highly-disadvantaged, is very persuasive. Enough to disarm all but the staunchest of critics but in reality he is somebody who is set on a collision course with society.

“Mitra argues that the information revolution has enabled a style of learning that wasn’t possible before” (Wired magazine). To his credit Mitra is a physicist, not a teacher, so for him learning takes place ‘at the edge of chaos’ and is ‘an emergent property of a self-organising system’. No doubt you will be able to find a bio-psychologist & neurosurgeon who will agree with that statement but what does it actually mean for our children living here in the UK?

For those growing-up in a world of social-media, fake-news and censorship how are they supposed to cope? Climate Crisis, Brexit and Polluted Oceans are just three immediate problems the future holds. We can’t blame our children if they want to lose themselves in an online world that’s far more attractive than reality – can we? “Who knows what we will need to learn in thirty years from now?” says Mitra “One thing is for sure we will need to be good at searching for information, collating it and figuring out whether it is right or wrong”.

Like all good research the School in the Cloud throws-up more questions than answers. The audience are taken on a journey of scientific discovery and hope for the future. The result is a film that is accessible to the general public with far-reaching implications for a creating a global society. The School in the Cloud is presented by Dorset Cloud School the after-school club that boosts learning for ages 7-11.